Over the last few years and even more so during recent months, Flint residents have been in an uproar in regards to their contaminated water supply and the terrible conditions their families have been exposed to. Leached lead pipes have been poisoning the homes in Flint, causing permanent and irreversible damage in the younger generation. While Flint is being put under a magnifying glass for this widespread epidemic, it is unknown to many that while Flint is an extreme case, they are not the only city or state dealing with these problems.

Recently, Boston.com issued an article titled “Massachusetts water systems test over federal lead limit.” The title explains it all, as they proceeded to report that water systems servicing over 264,000 Massachusetts residents have had testing samples exceed the federal lead standard at least once over the last three years. To speak to Massachusetts’ proactive efforts in comparison to Flint, Michigan’s cover up, Massachusetts did an inventory of 6,280 pipes with potential lead problems in 2006 and since then have replaced over half of them, equaling 3,575.

Lead poisoning is a terrifying epidemic as it can go undetected and show no warning signs until it is too late. Whether someone is ingesting water containing lead, or inhaling lead dust from their home, they are subject to all of the consequences that the hazardous metal has to offer.

While the Flint water crisis is a terrible occurrence, it sheds light on an issue that has been pushed under the rug for far too long. Vox recently published an article titled “The risk of lead poisoning isn’t just in Flint. So we mapped the risk in every neighborhood in America.” Vox worked with the Washington State Department of Health to map lead exposure risk nationally by census tract. They ranked their risk layers on a scale of 1-10 (The lowest risks being mapped in blue, while the highest area of lead poisoning mapped in red.) 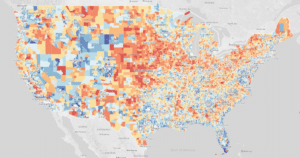 The image is more than frightening when seeing the hundreds of red specks freckled across the map. To make matters worse, there is no federal guideline insisting that states report on their children’s blood lead levels, therefore, very few states actually report this data.

While a homeowner may not have much control over the quality of water entering their home, they do have control over whether their home environment is safe. Getting a lead inspection performed is the best first step in being proactive and protecting your family.

"From the time I called Northeast Remediation for the estimate until the time they finished the job they were professional, punctual, and expert in their work. The bid they gave me was the best I received. They worked quickly and efficiently." - Watertown, MA

We serve the Greater Boston markets and more. Call today and let's talk about how we can help.
Page load link
Call Now Button
Go to Top